The World of Catan 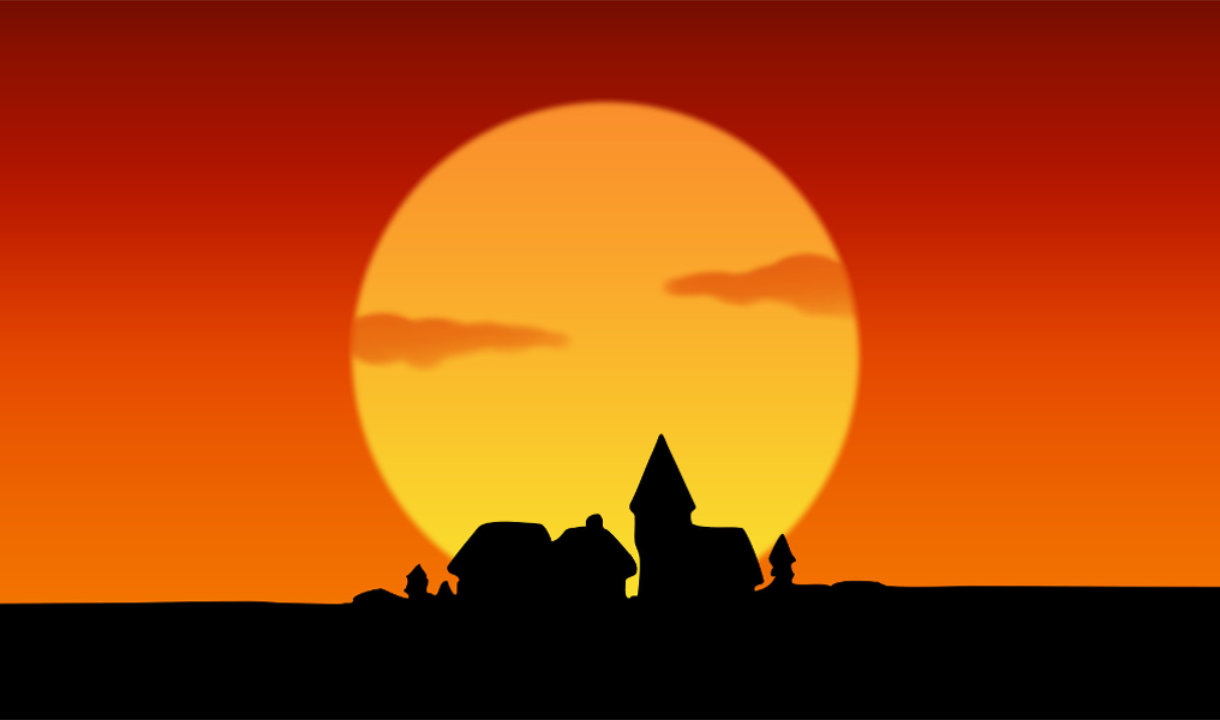 Roughly 25 years ago, I visited my family in Germany for Christmas…

Some of my friends there arranged a board game evening, which is something we usually did when I would visit my hometown. I remember that evening well. Partly because it was really good to see everyone again, but also because they introduced me to a new game that just hit the German market: ‘Die Siedler von Catan’, or as they say in English, ‘The Settlers of Catan.’ The game, created by the German board game designer Klaus Teuber, struck me as truly unique and I was immediately impressed by the unusual mechanics of both, strategy and player interaction. Being the collector that I was, (the game was not available in North America at the time), I purchased a copy and brought it back with me to Canada. In order to be able to play it with my friends here, I needed to translate some of the cards into English, which I did by writing onto them with a pen. I dashed out ‘laengste Strasse’ and replaced it with ‘longest road’, etc. My local board gaming friends here in Winnipeg loved it, and that very copy, which had lots of English scribbles on it, was well used over the next few months.

The next year, 1995, ‘Settlers of Catan’ won the prestigious German ‘Game of the Year award,’ and eventually an English edition hit the market here a couple of years later. Today, the game can be found in most retail stores all around the world. Looking back on it now, it was probably one of the very first modern German board games that would become successful outside of Germany or Europe. Millions of copies have been sold over the last 25 years and pretty much everyone – board gamer or not – has probably heard of it by now. It is, without a doubt, the most significant new board game of the twenty-first century. In addition to the base game, several expansions were added, and different versions from ‘Star Trek Catan’ to ‘Game of Thrones Catan’ kept introducing new variants throughout the years.

In 2015, the latest edition changed its name from ‘Settlers of Catan’ to simply ‘Catan,’ by which it is known as today. In case you are wondering: Catan is not a real place. It strictly exists only in the imagination of millions of players.

If you haven’t been able to experience it for yourself, then here is a quick overview of the game: Three or four players are settling an island that is comprised of randomly arranged hexagonally shaped tiles. Each tile has a number from 2-12 and a resource that it can produce on it. Either wood, wheat, brick, ore, or sheep. Each player starts with 2 settlements and roads that are placed on a corner between different tiles. Goal of the game is to be the first player to reach 10 victory points. Points are earned by gaining more settlements, cities, roads or victory point cards. On a player’s turn they roll two dice. Whatever number they rolled, that tile will produce resources (i.e., If an 8 is rolled, the tile(s) with the number 8 will produce whatever resource is depicted on it). Any player who has either a settlement or city on the edge of that tile will receive one or two resource cards. Settlements will get one card; cities will get two. Players can use these cards to buy and/or build new items on their turn. After each dice roll, there is also trading phase, where the current player can trade cards with other players for whatever exchange rate they deem fair. For example, I might offer one wheat in exchange for two sheep, and so on. The game continues until someone eventually has reached their 10 points. There are some extra detailed rules, but this is pretty much the gist of it.

What makes ‘Catan’ so special? For one, all the players are interacting with the game even if it is not their turn. Either by collecting recourses for a dice roll someone else made, or by trading with the current player. At the time Catan was first published, this was a unique concept in the board gaming world. Most other contemporary popular games were based on a player taking a turn, while the other player watched passively. Secondly, the game was simple to explain yet it offered a tremendous depth of game play and many different paths towards victory. This created a longing to try a different strategy for the next playthrough. And thirdly, no two games were ever alike because the initial setup was random. The configuration of the island was unique for each game. Ore, for example, might be available in abundance in one game, and hard to get in another. A final thought is best expressed by Klaus Teuber’s son Benny: “The beauty of Catan is that, in the end, you still have constructed something. In a way, everybody wins.”

After 25 years, Catan still remains a popular and interesting game for both, casual and serious board gamers. Furthermore, is encourages casual players to take a leap into the world of strategy without the need of complex rules. So, give it a try, or play it again. 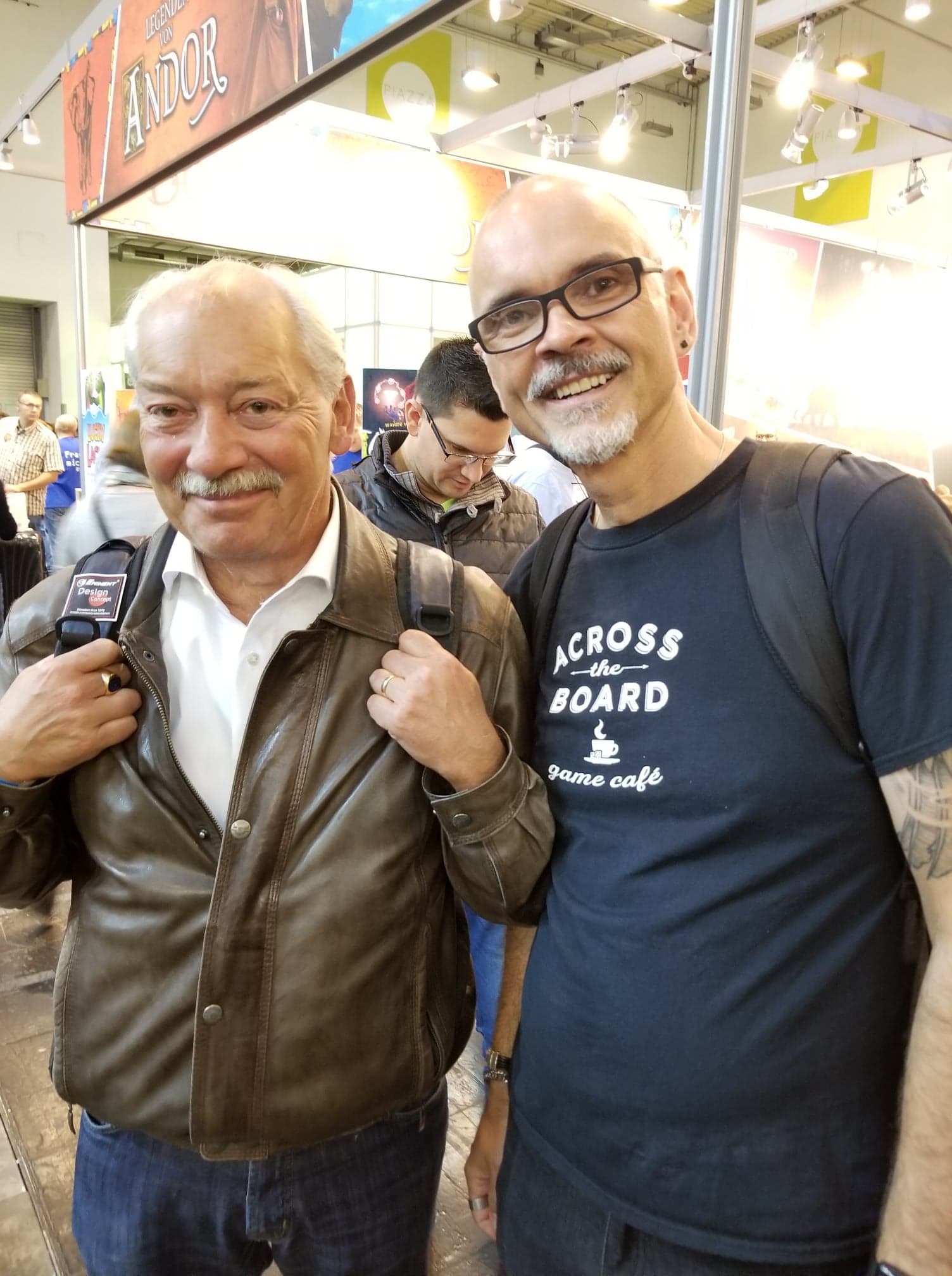 Klaus Teuber and myself at the Essen Fair, 2018

As discussed earlier, there are plenty of versions and expansions when it comes to the game of Catan. Here are some of my favourites:

The original base game that started it all. Each player is trying to be the dominant force on the island of Catan by building settlements, cities, and roads. On each turn dice are rolled to determine what resources the island produces. Players build by spending resources (sheep, wheat, wood, brick and ore) that are represented by resource cards. Points are accumulated by building settlements and cities, having the longest road and the largest army (from some of the development cards), and gathering certain development cards that simply award victory points. When a player has gathered 10 points, they claim the win.

The original game was designed for only 3-4 players, but a 5-6 player expansion makes room for more. The only change in the rules is that there is a building round at the end of each turn in which any player can build. This extension requires the base game of Catan

This is an expansion for the Catan base game. Players can build shipping lanes, which are very similar to roads. Additionally, the game comes with many different water-hex-heavy variant setups. This expansion requires the base game of Catan. Ideally, using the same publisher and edition of the game.

This is also an expansion for the Catan base game which introduces several new aspects to the gameplay, but the two major ones are creating knights to protect the land from invading barbarians and building city improvements that confer benefits upon that city’s owner. Overall, this increases the tactical complexity to the game and game length. It adds three new recourses, decks of development cards, and the ability to build knights on the island. This expansion requires the base game of Catan. Ideally, using the same publisher and edition of the game.

RIVALS FOR CATAN
2 players, ages 10 and up

The original game of Catan can only be played with three or more players. This version is a great adaptation for only two players. Players take the role of a prince or princess ad decide the fate of their settlers. In addition to settlements, roads, and cities they also construct the buildings where their subject works, hire heroes that can make their opponent’s life as a gamer difficult, and build ships to boost their trade.

STARFAHRERS OF CATAN
3-4 players, ages 10 and up

The year is 2700 A.D. Compete for the prestigious post of Ambassador to the Galactic Council. To attain this lofty position, players must leave earth to explore and colonize the galaxy, while working to establish trade with alien cultures, encounter aliens, and defeat pirates.
A very cool and beautiful variant of the original game, that keeps the core mechanics while introducing the elements of discovery and conflict with pirates who will reward you based on the choices you make.

CHECK OUT MORE OF THE CATAN UNIVERSE 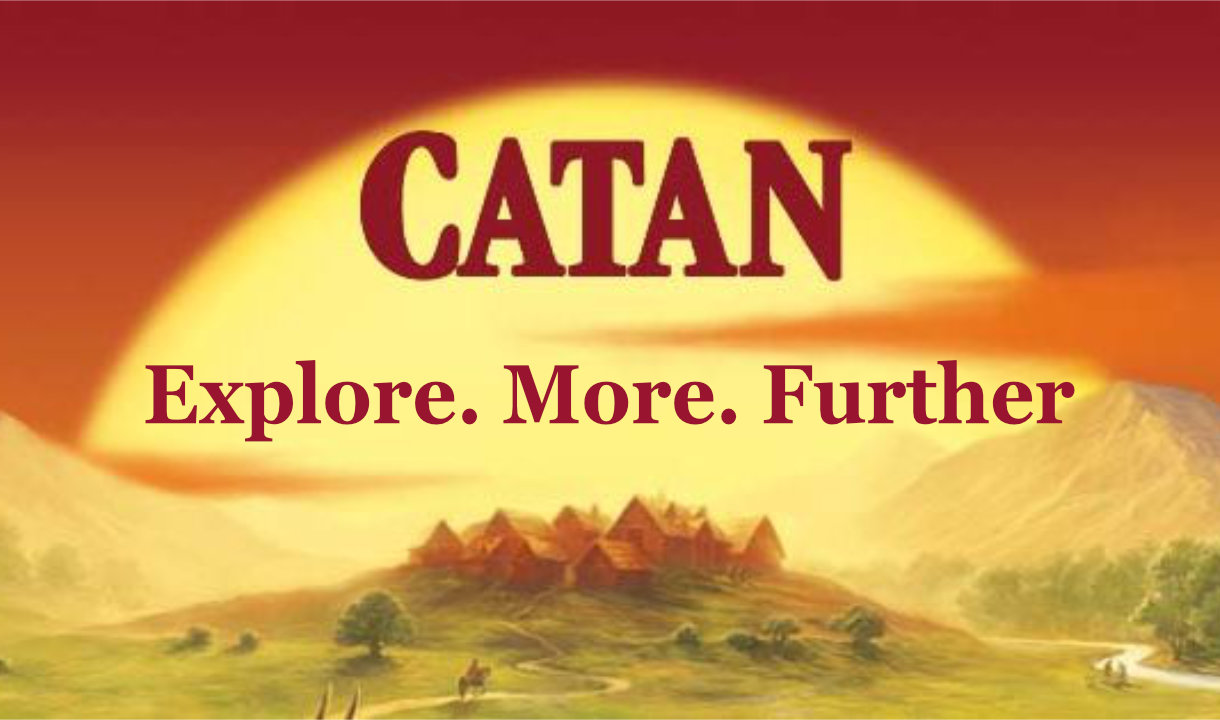 Would you like to expand your CATAN experience? Here are some suggestions: 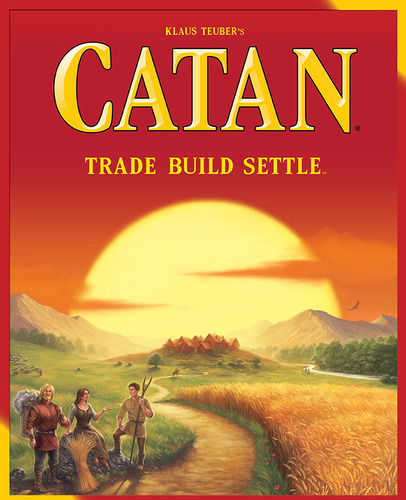 The base game that got it all started 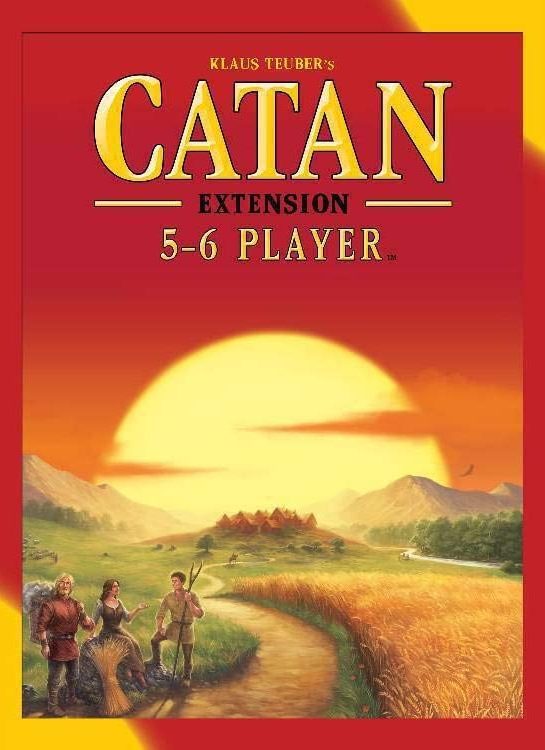 Adds up to 2 more players to the base game 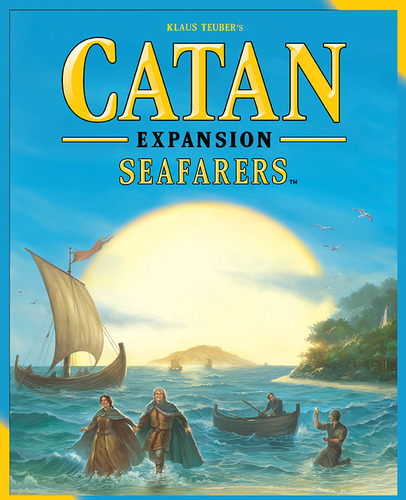 Expand the island with shipping lanes 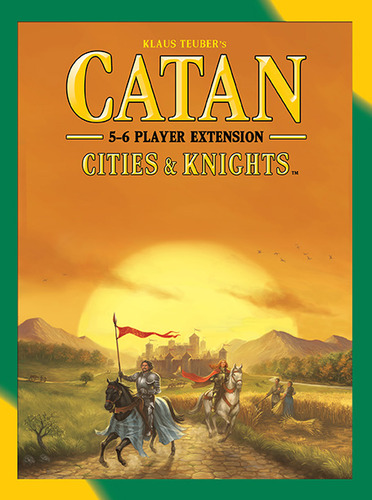 Protect the land from invading Barbarians 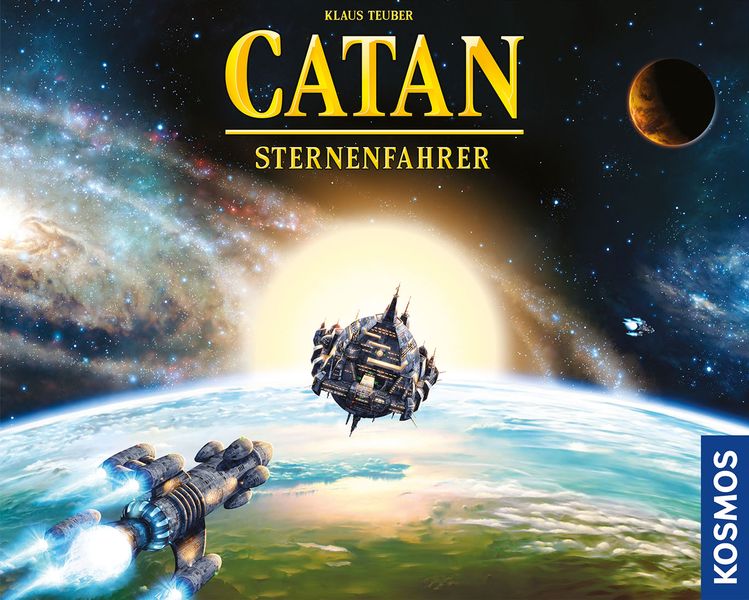 Explore and discover the vast space