The story of ‘Fog of Love’ 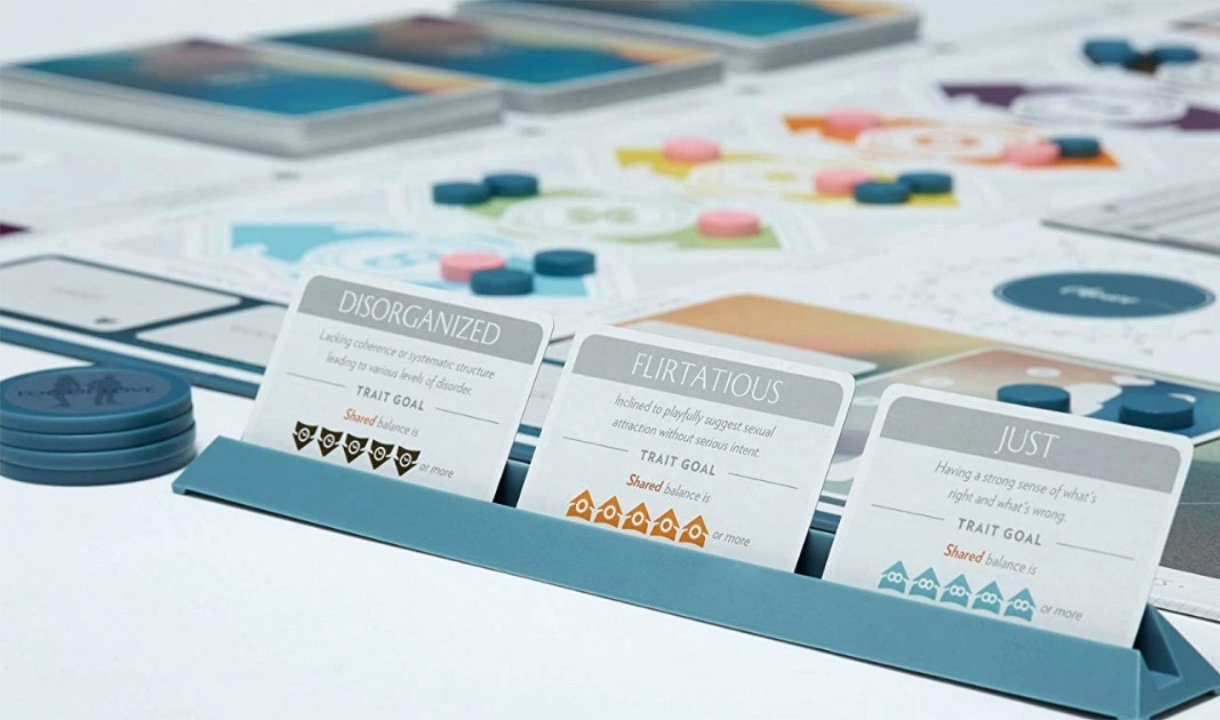 The choices of themes in board games are plentiful…

They range from games about trade, trains, fantasy, deep sea adventures to abstract, pets, outer space, or even quilting. With Valentine’s Day just around the corner the question one might ask is: What about romance? Interestingly enough when it comes to games that deal with romance or relationships the selection becomes almost zero. Except for one notable and popular title that has been able to break through this invisible barrier – a game called ‘Fog of Love’ by the Danish designer Jacob Jaskov. This strictly 2-player game is unique on many different levels, one of them being the elegant and beautiful cover design that features the silhouettes of a man and a woman on an otherwise white box. The game is also available in different editions, that feature either two men or two women, or a couple that has one person in a wheelchair.

The other unusual aspect of Fog of Love is its subject of relationships. It is a game that is primarily focused on discovering things about yourself, or your playing partner, rather than on winning or losing. It leads to an experience that is unlike anything that I have encountered in other board games before. So how does it work?

In Fog of Love, two players are playing out a romantic comedy, while taking on the roles of fictious people that are in a relationship. Players are not playing as oneself but as an imagery character who is given a gender, occupation, feature and character trades of their choice. Once their characters are set, a scenario guides them through the current plot of the story. Essentially players will take turns back and forth playing scene cards. The cards give them choices that will be made separately and then revealed. The effect of these choices will increase or decrease certain aspects of their character trades. With each scene characters are trying to reach individual or shared goals which are hidden. If these goals are met each character increases or de-creases their satisfaction points (how happy are they to be in this relationship). Players also have ‘Destiny’ cards which outline a condition under which a character meets their ‘destiny.’ Players can ‘win’ if both meet their destiny at the end of the game. Breaking up can also be a destiny. After all, who wants to be in a relationship with a jerk? In the end, winning a game is not really the central focus here, it is really more about the journey and the mutual telling of a story.

Fog of Love has become a widely popular and successful title and I was intrigued by what might have inspired the designer to create a game that, on the surface, appears to be outside the norms of most mainstream games. Luckily, Jacob Jaskov kindly agreed to an interview, and I was able to connect with him virtually at his home in Copenhagen, Denmark. 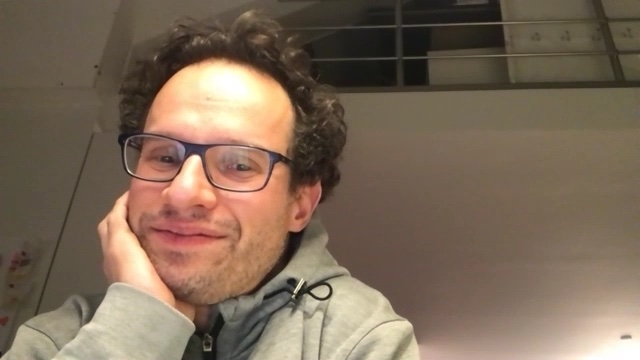 “My background is in the social sciences.” Jaskov said. “In the early 2000s I started a company here in Denmark that was focused on innovation and software products that implemented how to learn and understand things in a new way. I think you can see some of that in the DNA of Fog of love.” But fundamentally he wanted to create a game for his wife. “I wanted to create a game for her, I didn’t know what game. I was completely open and just listened to her, because she was not interested in all the traditional games.” He himself was a hobby board gamer in the 90’s and returned to board gaming again in 2012. “I was like, wow that is amazing what is happening in games. I looked at them with my innovation perspective and understood how they changed the interaction structures in the games and thought this is incredible. I bought a lot of games and wanted to play them with my wife. Initially she played them but then she grew tired of it because all the games are somehow similar. They are addressing the same audience. Either you are competing directly head-to-head or you have this Euro mechanic where it is indirect competition. You need to be very rational and very planning. It’s an economy exercise.” His wife felt that most games were targeted towards people like him, but there was little that interested her. They also realized that, when watching TV, they would switch from Sci-Fi and action shows that appealed to him to Rom-Coms that appealed to her. “It was very stereotypical, and that was ok. There is always a trade-off. The problem with games was that they were always on my terms. There were actually no games that fit with her taste.” He searched the internet and conventions for games that might address some of her interests, but eventually came up empty. Finally, he suggested that he would design a game for and with her as a fun hobby project. He wanted to incorporate her tastes, preferences and her way of thinking as well as the kinds of interactions she preferred. “Then I played some games with her and analyzed what’s actually interesting for her. Completely open. I was just learning and listening.” Theme of course was also important, and they arrived at the theme of romance. After doing a lot of research he tried to figure out what kind of conflicts there are in Rom-Coms. “It’s an inner conflict not and outer conflict. An inner conflict about ‘do I want to be with this person or not?’ Do I trust this person, and should we become a couple or not”? He eventually concluded that this is a different kind of conflict then was usually found in other games. He would have to invent his own system. “I wanted to create something that tells a story. That was an important part of this.” He experimented with a lot of different mechanics and continued to research how love and relationships work on a scientific basis. “I am working very bottom up and open ended. Some of my fellow game designer thought I was an idiot because it is a very different kind of working.” His goal was simply to create interesting interactions, which eventually led to the idea of playing a card and both players choose their response. “That is one of the key things of Fog of Love. When both players chose the same things there were high-fives. I could see that those were interactions where players spontaneously and immediately were happy” The game pretty much grew out of these experiments and tests. The final piece of the puzzle was the outcome of the relationship. “If everything goes well and you end up happy, that’s fine. But what if you are dating an a#@$e? My wife said if she is going to play this, she wants to be able to break up in the game.” This eventually led to the ‘destinies’ where you are ‘winning’ even if you are meant not be to together. “I struggled with this for almost a year; to create a game where you can be together or break up and have different success trajectories.” Of course, players want to have that choice which led to the idea of being able to exchange destiny cards throughout the game play. “It is up to you as a player which destiny you will go for. Everything is possible when you meet someone but then as you go along you commit more into one direction than the other. And then big things can happen where you change direction again.” Sometimes life inspires the best ideas.

So, what kind of game is Fog of Love? Is it a role-playing game, a social interaction game or a strategy game? Well, a little bit of all of these things but in the end, it is fun and truly a game unlike any other. You don’t have to be romantically involved to enjoy this experience. In fact, as Jacob pointed out, a big percentage of his audience are people that are not a couple. This might not be the perfect game for everyone, but I believe it is worth a close look. Especially if you are interested in exploring your inner emotional intelligence that drives any relationship.

If you would like to hear the entire interview you can listen to it here on our podcast:

Are you intrigued to try ‘Fog of Love’? 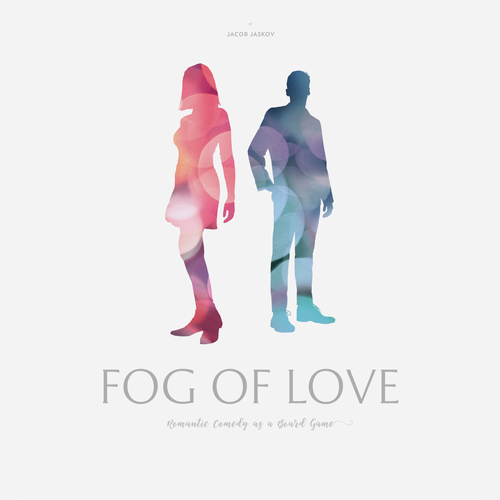 Be part of the roamntic comedy that unfolds.

Expansion: It will never last 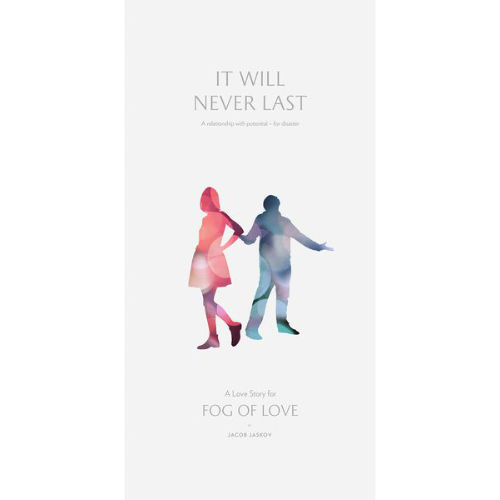 Expansion: Trouble with the in-laws 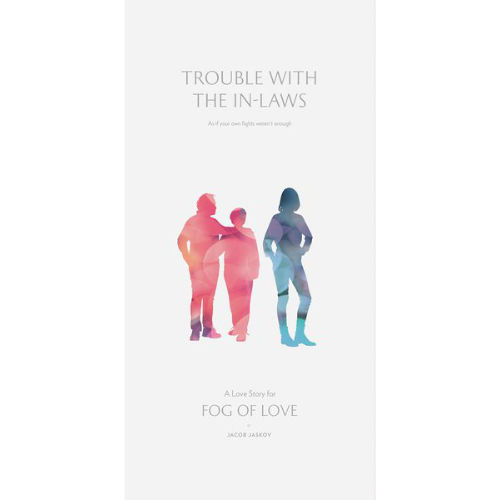