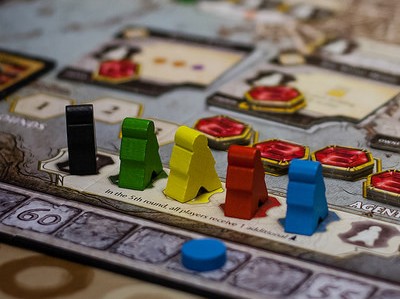 Life is a series of choices…

Every day we have to make decisions on how we spend our time, money or other resources in order to best achieve whatever personal goals we might have. Of course, the challenge is that all of our basic resources are limited; there are only so many hours in a day; money doesn’t grow on trees and living conditions change. We are constantly evaluating how to best utilize whatever means we have at our disposal in order to secure stability. If you think you have what it takes to manage a limited supply of resources, you will be able to prove it with a popular game mechanic called ‘worker placement games.’

In a worker placement game, players can assign actions to the ‘workers’ at their disposal. Workers come in a limited quantity and are commonly represented by either meeples (game pieces with a stylized human form), dice or cubes. The choices of actions are usually represented by placement spaces on either the central game board or an individual player board. An action space might give you a one-time direct benefit; a ‘building resource’ needed to construct something; additional money; victory points or other abilities. Most often, an action can only be taken by one player at a time which continuously creates an atmosphere of competition and urgency. Many work placement games also have an action space that affects turn order, which is often an important strategy in a game. No matter which game title you choose to play, the one thing that worker placement games have in common is that there are never enough turns or workers to do everything you were hoping to accomplish. This is what makes these games so intriguing. You are often left wondering what you could have done differently to maximize your worker’s productivity effectively.

Worker placement games have become extremely popular over the last couple of decades. One of the reasons may be that they give players a set of clear-cut choices. You have x-number of workers and y-number of places to put them. Each choice you make will result in a specific reward. This concept makes these games very easy to teach. At the same time, they provide room for complex strategies that ensure re-playability. For that reason, these games are often a great way to introduce new gamers to the board game hobby while giving experienced players new and interesting logistical challenges. There is plenty of player interaction as everyone competes for various action spaces, but little room for aggressive or ‘mean’ game play, as each player is mainly concerned about their own strategies. More often than not, worker placement games also scale really well in regard to player count and are usually a great choice for 2-player gaming as well.

There are plenty of worker placement titles out on the market with a plethora of different themes. They come in various levels of difficulty from very easy to complex. If you are intrigued and would like to try one for yourself, these are my top 5 recommendations:

In this very thematic and visually beautiful game, players are master painters working to restore a fresco in a Renaissance church.

Each round begins with players deciding what time they would like to wake up for the day. The earlier you wake up, the earlier you will be in turn order, and the better options you will be guaranteed to have. Wake up early too often, however, and your apprentices will become unhappy and stop working as efficiently. They would much rather sleep in!

Then, players decide their actions for the turn, deploying their apprentice work force to various tasks. You’ll need to buy paint, mix paint, work on painting the fresco, raise money for said paint by painting portraits, and perhaps even send your apprentices to the opera in order to increase their happiness. Points are primarily scored by painting the fresco, which requires specific combinations of paints, so you’ll need to buy and mix your paints wisely, in addition to beating other players to the paints and fresco segments you would like to paint.

Even though the box cover art looks intense and dark, it is actually a rather light and friendly gaming experience. Each player takes the role of one of the masked Lords of Waterdeep, secret rulers of the city. Through your agents, you recruit adventurers to go on quests on your behalf, earning rewards and increasing your influence over the city. Expand the city by purchasing new buildings that open up new actions on the board and hinder – or help – the other lords by playing Intrigue cards to enact your carefully laid plans.

During the course of play, you may gain points or resources through completing quests, constructing buildings, playing intrigue cards or having other players utilize the buildings you have constructed. At the end of 8 rounds of play, the player who has accrued the most points wins the game.

Agricola is probably one of the most popular and influential worker placement games of the last decade. This is partly due to its beautiful graphic design and charming theme. You are a farmer in a wooden shack with your spouse and little else. On a turn, you get to take only two actions, one for you and one for your spouse, from all the possibilities you’ll find on a farm: collecting clay, wood, or stone; building fences; and so on. You might think about having kids in order to get more work accomplished, but first you need to expand your house. And what are you going to feed all the little rug rats?

If you are completely new to the mechanics of worker placement than this title is a great starting point. In this charming game you and the other mayoral players each struggle to create the best pioneer settlement by developing land along a river bed in your town, collecting resources from the area, and constructing buildings. As you explore and build up the untouched frontier, your workers will settle down along the way, meaning that your other workers will shoulder more of the burden to do what you want to do, which includes making nicely organized landscapes to please the aestheticians in town.

Every decision will count in this fast and streamlined tile-placement game, and in the end the player with the most impressive settlement will win!

The “Stone Age” times were hard indeed. In their roles as hunters, collectors, farmers, and tool makers, our ancestors worked with their legs and backs straining against wooden plows in the stony earth. Of course, progress did not stop with the wooden plow. People always searched for better tools and more productive plants to make their work more effective.

In Stone Age, the players live in this time, just as our ancestors did. They collect wood, break stone and wash their gold from the river. They trade freely, expand their village and so achieve new levels of civilization. With a balance of luck and planning, the players compete for food in this pre-historic time.

Are you intrigued to try a worker placement game? Here are my top suggestions: 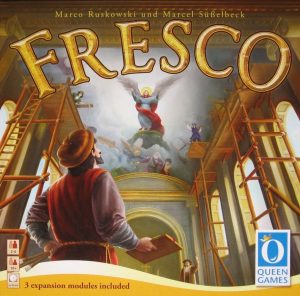 Send your workers out to pain a beautiful ceiling 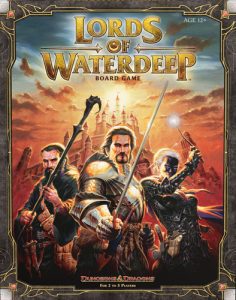 Send your workers on adventures 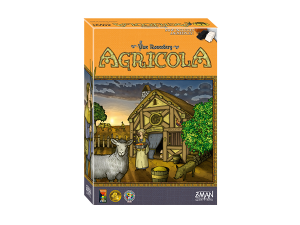 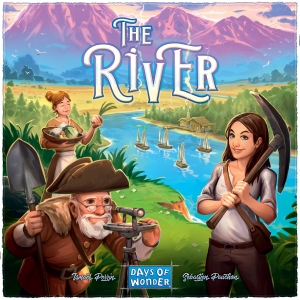 Build a settlement along a river bed 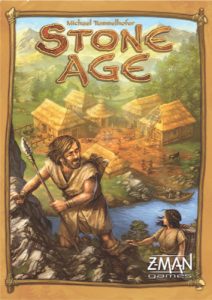 Build and support your community