What would happen if I became someone completely different…

and were to experience things in a world that is purely imagined? For decades a game called Dungeons and Dragons has attempted to provide that experience to generations of players from around the world.

Most of us have heard of Dungeons and Dragons (commonly also referred to as D&D or DnD), be it from your own experience of playing it, or from a long list of pop culture segments and references. The game has been heavily featured in shows like ‘Stranger Things,’ ‘Community’ and ‘Big Bang Theory’ to name just a few.

D&D has actually been around since its first publication in 1974 and was originally designed by Gary Gygax and Dave Ameson. It was first published by Tactical Studies Rules (TSR) and is now being published by Wizards of the Coast. Since its conception, Dungeons and Dragons has continuously grown in popularity. In 2017 reports showed that there were 12-15 million players in North America alone and that number continues to grow.

So then, what exactly is the game of Dungeons and Dragons and how does it work? D&D would be best described as a tabletop role-playing fantasy game. You and your friends are sitting around a table and pretend to be heroes that are going on an epic adventure together. All of this is pretty much happening entirely in the players collective imagination. Every game would be run (or lead by) a Dungeon Master (often referred to as a ‘DM’). Their role is to be the main storyteller and to outline the adventure that our heroes go on. Quite often the DM actually created the story themselves. Other times these adventures are taken from other sources such a downloadable stories or books of already pre-thought developed plot lines. Part of the DM’s job is to give the players goals that they should accomplish (such as finding the source of a mysterious plague that haunts a village or an entrance to a secret pathway) and in return reward them with special items or powers for completing a certain challenge (such as new weapons, treasures or abilities). It is important to note that the dungeon master is not actually playing against the other players. They are part of the overall gaming experience and hopefully provide everyone with a story that is fun and challenging. At the same time, the other players are working together to overcome the challenges laid out by the DM. There really is no winning of an individual in D&D. The main purpose of the game is to spend time together while experiencing some thrilling adventures with your fellow players.

Before a player can venture into the imaginary world, they also have to create a character. What gender (if any), name, age, strength, job or special abilities does their character have? For many experienced players the process of creating their character can be a lot of fun, while there are plenty of ‘pre-designed’ characters that can be downloaded from different sources. These can provide novice adventurers a quick way to enter the game. All of these different characteristics are entered and tracked on a player’s character sheet, a single sheet of paper that will be used throughout the game to follow a character’s progress. One can get rather creative during this process, from choosing a wardrobe, skin texture (like scales or fur) to pets or cool gadgets.

When it comes to actual game play, Dungeons and Dragons appears rather complicated from a distance. The rule book (also called The Player’s Handbook) is extensive, but at its core the game is actually very simple. Most of the game can be summarized into 3 simple steps: Describe – Decide – Roll. First the Dungeon Master describes what is happening. For example, “You enter a cave. After looking around you see a small winged creature that is sitting in front of an archway that is leading to another room. What do you do?” Now the other players discuss and then decide what they would like to do next. They might say “I am going over to the creature and see if I can talk to it and ask it some questions.” To see if their attempt was successful, they now roll a 20-sided die. The higher their roll the better the chances of success. Based on the outcome of the die toss, the DM continues the story: “The creature remains silent and looks at you with a confused expression. What do you want to do now?”. And so the cycle continues…

The second step, decide, is what gives Dungeons and Dragons its unique falvour. In most tabletop games you are limited by what you can do on your turn by the rules that are laid out by the game. In D&D you can pretty much do anything you would like. Run, fight, fly, sing or sit and do nothing. Kind of like real life. In gaming terms that would be called a ‘Sandbox Game.’ The choice of what to do is completely open and is only limited by a player’s imagination.

That emphasis on imagination is also reflected in the necessary game components. All a player needs to participate in the adventure is a character sheet, a pencil and some dice. That’s it! One cannot get any more analogue in a gaming experience than that. Some players or DMs like to use a board in the middle of that table that resembles the area they are currently in, like a marketplace or a cave, as well as miniatures that can offer a visual representation of the heroes or characters and foes they interact with. That is not a necessity, just a nice addition sometimes.

Dungeons and Dragons provides truly imaginative and interactive gaming fun that allows a player to immerse themselves fully into an imaginary world. More often than not, they eventually start to think like their character and less like themselves which can be a great creative and expressive experience for any age. We are all playing different roles as we go through our everyday life, often we don’t even notice it. D&D gives us the chance to become someone different in a safe environment, which can lead to a remarkable experience of self-discovery. A chance to share with others that there is more to us than what simply meets the eye. That sharing of vulnerability is what makes this game truly unique. If you haven’t tried it yet, I encourage you to gather some friends or join the many gaming groups around the city to see what all the talk is about.

Are you intrigued to try a D&D game? This can get you started: 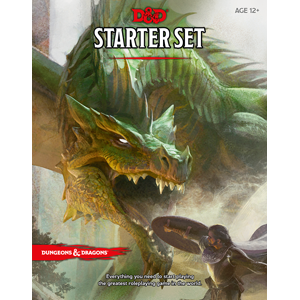 Everything you need to get you into your first game. 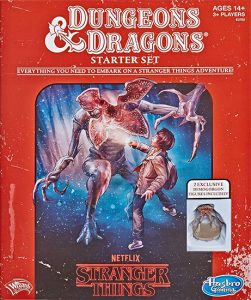 Experience the adventures with the Stragner Things theme. 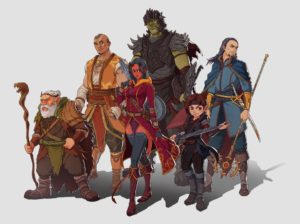