In the last decade, one of the biggest new waves of entertainment are escape rooms…

The concept was originally based on a series of “escape-the-room” video games which are also believed to be the source of its name. Early renditions of the live escape room experience appeared at gaming conventions as early as 2003. In 2007, a Japanese company lead by Takao Kato developed the concept a little further. These Japanese renditions focused primarily on games that involved logical and mathematical puzzles, not unlike the video games which inspired them. By 2012, escape rooms had appeared in Australia, Singapore and North America.  Around the same time, a Hungarian company, led by personal trainer, Attila Gyurkovics, opened about 20 locations throughout Europe and Australia. His style of game play introduced additional elements of play such as lock and key puzzles. By the end of 2017, there were about 8,000 escape room venues world-wide and the number continues to grow. There are now escape room conferences and markets as well as a university level design course.

The concept of an escape room is relatively simple. A group of players are ‘locked’ in a room (well, not actually locked, due to safety concerns, but you get the idea) and they have a limited time to find the way out. Most often, they are given an hour. In order to leave the room, the team of players must work together to solve riddles, find clues, keys and lock combinations, each of which will bring them closer to the final puzzle. If everything goes well, they will escape the room before the timer runs out.

As you might have guessed, this form of game play rewards communication and teamwork, as each player brings their own unique perspective to a puzzle. Since the challenge of a room dissipates once a group of players have solved its puzzles, most escape rooms are designed to be played only once. This is the reason many escape room facilities offer several rooms to choose from, frequently change their setups and make the experience more immersive by setting each room in a different theme or storyline.

If you are someone who cannot get enough of escape rooms, or you want to see what all the fuss is about, then you’re in luck. There are a great number of board game versions that allow you to bring this exciting and thrilling experience into your home.

Not only are these games perfect for seasoned escape room players, they offer a novel approach to your regular game nights with family or friends. Furthermore, since many of them depart from the traditional rule set of a strategy board game, they also provide an easy and uncomplicated introduction to board games for people who want to avoid lengthy rule explanations and just jump into the gaming experience. They’re almost always based on co-operative game play, which makes them a perfect vehicle for teambuilding. Alternatively, you can also try to solve some of them in solo mode.

Not unlike their real-life counterparts, these games are designed to be played only once. For that reason, they are often reasonably priced, and most companies offer a long list of titles with varied themes using the same game mechanic. This also makes them great bring-along gifts or stocking stuffers.

Note: Most of these games use components that will be unusable after the first play through because players will be asked to write on or otherwise permanently change a card or picture. Others titles are re-playable, so you can give them to friends or colleagues after you complete the challenge. So, give escape room board games a try at your next game night. You’ll be glad you did.

Let’s take a look at some of the more popular escape room board game adaptations.

This is probably the most popular series. Currently, it has more than a dozen titles to choose from. Each scenario challenges players to solve a mystery together before the timer runs out. Themes range from an abandoned cabin and mysterious museum to a haunted roller coaster. These games are currently priced under $20 Canadian but since gameplay will require the alteration of their various components, they are designed for a single play through. They are guaranteed to provide a fun filled and exciting time for a group of up to 4 people and make a great small gift.

Likely to be the biggest competition to the Exit: The Game series they currently boast a lineup of about 20 titles. They are currently priced at less than $20 Canadian, so they offer a very affordable experience. Their gameplay is entirely card based so they can be re-used by a different group after you have finished an adventure. Each adventure can accommodate up to 6 players, so they’re another great idea for a small gift.

This escape room imitation comes in a more dramatic presentation. It is at a higher price point than Exit or Unlock but it comes with 4 scenarios right out of the box. It also boasts a pretty cool hint decoder that also functions as a digital timer, as well as other elaborate game components. They are designed for 3-5 players. For those players who love this brand’s experience, there are additional editions that offer more scenarios as well as a 2-player version.

ESCAPE THE ROOM and ESCAPE ROOM IN A BOX

These are newer additions to the world of escape room board game adaptations. They don’t have a large catalogue of titles yet, but they do offer other interesting aspects. Both properties can accommodate up to 8 players and Escape Room in a Box even offers Amazon Alexa integration for a more immersive gameplay experience.

Are you intrigued to try an Escape Room Game? Here are my top suggestions: 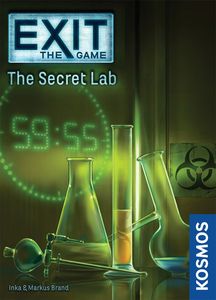 Work together to exit the room in time. 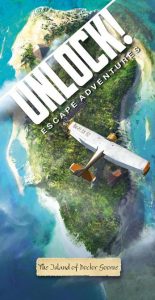 Escape the adventure before it is too late.

Find the hidden keys before the time runs out.